The precinct in the city center is covered in silence.

Meiji Jingu is a Shinto shrine which is located at one of the busiest and most popular areas in Tokyo called Harajuku and Omotesando.

Tokyo was used to be called Edo, which was ruled by Tokugawa Shogunate. Tokugawa Ieyasu, the first head of the military government, moved to this city in 1590 and ruled over Japan for about 260 years after winning the decisive battle at Sekigahara in 1600.

The political revolution in 1868, called Meiji Restoration, finally terminated the Tokugawa military government and returned control of the country to imperial rule under Emperor Meiji. The revolution brought Japan substantial political, social, educational, and economic changes, and Emperor Meiji was at the center of the movement.

So after Emperor and his consort, Empress Shoken demised, people in Japan strongly desired to commemorate their souls and their virtues in Tokyo. (Their graves were built in Kyoto since they were born and raised there.) With the great help of the youth volunteers around Japan, this shrine was finally established in 1920. The deep forest surrounding this shrine was also planted one by one by them. And the wood has been growing naturally since then. Since 2020 is the 100th anniversary, some projects have been carried out, including the newly opened Museum, which stores precious items related to the imperial families such as a desk, a beautifully decorated carriage that the Emperor used, and the couple's portraits.

You'll enjoy the fresh air in a spacious precinct in the city center. 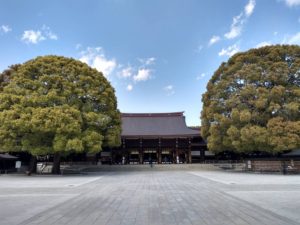 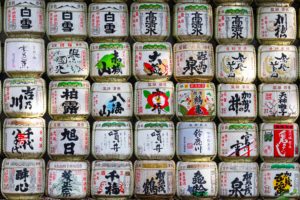 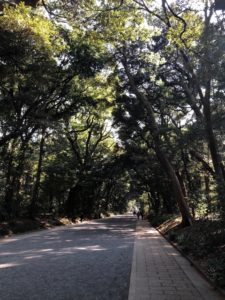 The inner market used to be one of 11 central wholesale markets in Tokyo, which opened in 1935 and closed in 2018. Its total transaction amount was the best in Japan. They dealt with a variety of fishery products, fruits and vegetables, chickens and eggs, Japanese pickles, and processed foods such as Tofu, bean sprouts, and frozen foods.

This inner market was conveniently located in Ginza, one of the most prominent upscale districts in Tokyo is within 1 km away from there.

Due to the deterioration of the facilities, the inner market closed on October 6th, 2018. The function of the wholesale market moved to the Toyosu area, and the outer market with about 460 of retainers and restaurants remain in the Tsukiji area. Besides, newly about 60 fresh food retainers opened their stores in the new facilities called "Tsukiji Uogashi." Since the outer market used to be mainly for professionals, they have a great selection of items and foods. For example, Azumaminamoto-no Masahisa, one of the long-established knives shop, sells not only kitchen knives for daily use but also knives special for cutting huge tunas.

Let's stroll around this vibrant area. I'm sure you'll soon find some freshly made delicious dishes or unique products there. Of course, a variety of ready-to-eat fresh seafood and sushi are waiting for you, too! 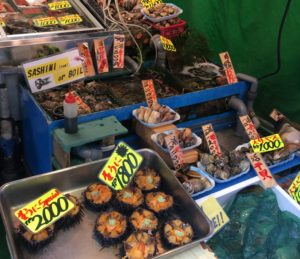 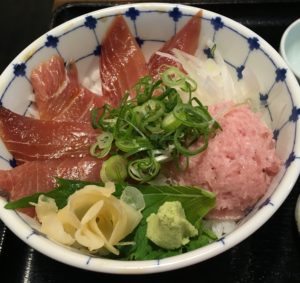 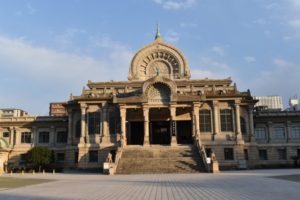 Ginza is a town in which one can feel a sophisticated and historical atmosphere that other areas don’t have. Major department stores and luxury bland stores are lined at the main street called “Ginza Chuo Street,” where you will enjoy worldwide shopping. On the other hand, you’ll find well-known long-established stores and popular restaurants in the back streets. Ginza will continue to progress over time, keeping the attractiveness of good old days and generating new energy. 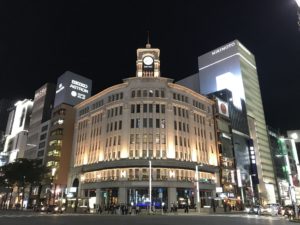 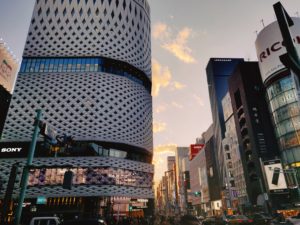 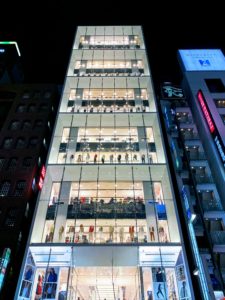 Remains of Edo castle and a small Japanese Garden

There used to be one of the finest castles in Tokyo, called" Edo castle" or" Chiyoda castle." The total area was about 230 ㎢ , and the full extension of the outer ward was about 12 km. It had previously served as the residence of the Tokugawa Shogunate, the head of the military government, and the political hub for 265 years. After the capitulation and Meiji Restoration, the castle was vacated for the residence of Emperor Meiji.

The original history of the castle dates back to the warring state period. The samurai warrior general, Ohta Dokan, built the first castle in 1457, which was protected by earthen walls. After winning the decisive battle of Sekigahara in 1600, Tokugawa Ieyasu, the founder of the Edo military government, launched the full scale of its repair.

The current Imperial Palace East Garden is located on the east side of the Imperial Palace and within the previous castle compound, called "Honmaru" (inner citadel), "Ninomaru" (second citadel), and "San-no-maru" (third citadel). Honmaru was the center of the castle because it has the castle tower and the residence of the Shogun. From the Meiji period and before the beginning of WW2, there were several facilities relating to the Imperial Household Agency and the Imperial family in the area. This ground was registered as a special historic site in 1963 and was opened to the public in 1968.

The garden is filled in nature. For example, visitors can enjoy strolling around Ninomaru thicket, which was created on the initiative of Emperor Showa to preserve the disappearing environment of Old Tokyo. Also, there is an orchard of the old variety of fruits and a beautiful pond in the Japanese garden where butterfly Koi carps have been released. The rich nature and the remains of Edo castles have attracted people around the world.

Flowers and plants of each season can be seen in this garden, such as Japanese apricots, cherry blossoms, azaleas, irises, hydrangeas, and sasanqua.

Since it's free to enter, why don't you visit and take a walk here? 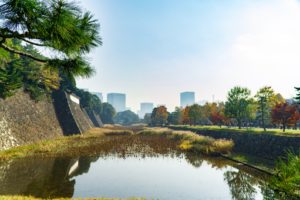 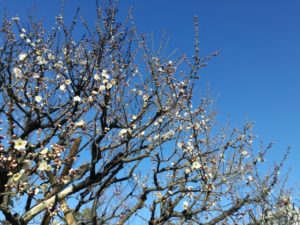 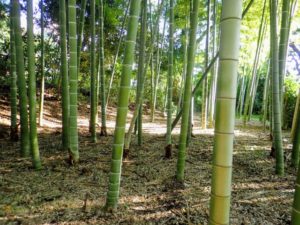 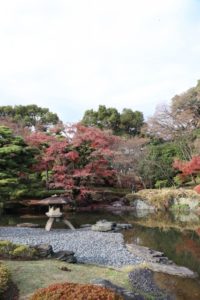 The oldest temple in Tokyo and the lively town

Asakusa, Taito Ward, is a town that has been modernized while retaining the old downtown atmosphere. "Sensoji Temple" is indispensable when we talk about Asakusa. The temple is one of the oldest Buddhist temples in Tokyo, and 30 million people visit there annually.

The history of Sensoji Temple is attributed to the fact that the fishermen's brothers Himaehamari and Takenari caught a wooden Buddhist statue in a net at the Sumida river. They showed it to the village head, Haji Manakachi. Then he recognized it as a holy Kanzeon Bodhisattva and remodeled his home into a temple. After the Buddhist Saint Shokai built the Kannon Hall in 645, the merely fishing village along Tokyo Bay gradually drew attention and developed as a famous temple town. Temporarily, the Asakusa area lost its vitality due to the closure of the theaters that opened one after another. However, the unique attractions such as several shopping streets like Nakamise and various long-established or newly opened restaurants and shops have been revitalizing the area.

Asakusa has further become one of the top tourist destinations in Tokyo thanks to "Tokyo Sky Tree," which has a 360° view from 350m and 450m hight that is located within walking distance. 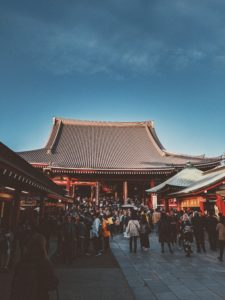 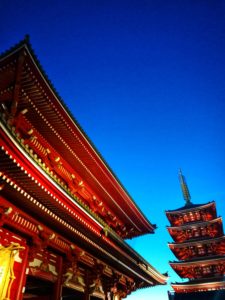 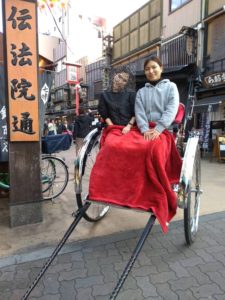 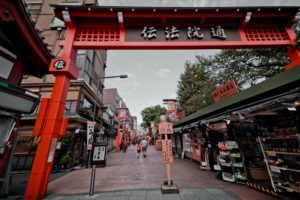 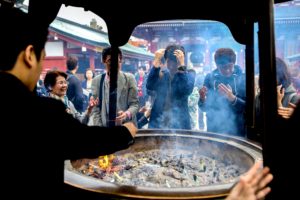 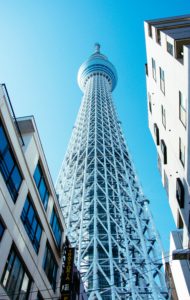