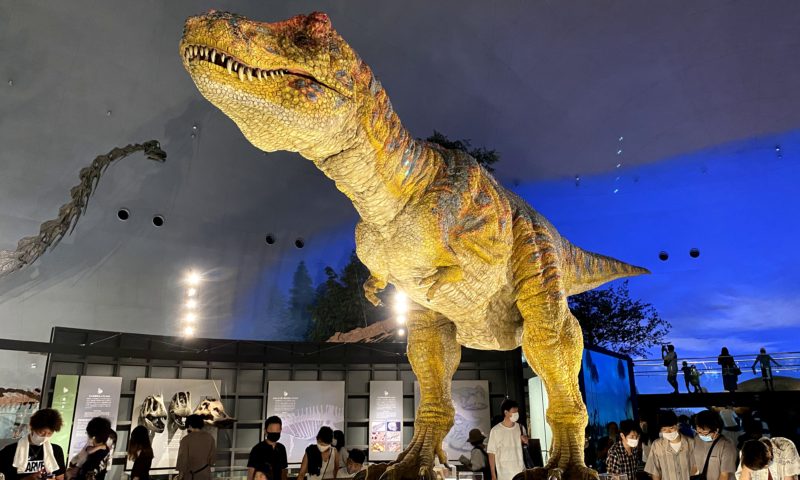 Fukui- The Kingdom of Dinosaurs.

This summer I visited the Hokuriku Region with my family. Hokuriku includes Fukui, Ishikawa, Toyama, and Niigata prefecture.

It was just one hour flight from Tokyo Haneda International Airport to Komatsu Airport in Ishikawa Prefecture. The other primary access is “Hokuriku Shinkansen,” the Bullet Train, which connects between Tokyo Station and Kanazawa Station in Ishikawa by just two and a half hours.

The first destination of day 1 was ” The Fukui Prefectural Dinosaur Museum,” which was a 1-hour drive from Komatsu Airport. Fukui is called “The Kingdom of Dinosaurs”. Why?

That’s because many dinosaur fossils have been discovered there. Today, Fukui Prefecture has drawn the center of attention for the dinosaurs research in Japan.

However, it hasn’t been so long since the situation occurred. In 1982, an early Cretaceous crocodile was discovered in Katsuyama City, Fukui, and dinosaur teeth were found at the same location in the following year. Since then, dinosaur bones and footprints have been found one after another. And the first complete claw in the country was discovered.

In Katsuyama City, where many dinosaur fossils have been excavated, there is the “Katsuyama Dinosaur Forest,” including the “Fukui Prefectural Dinosaur Museum” which is one of the three largest dinosaur museums in the world.

In addition to merely excavating a large number of fossils, most of the new species of dinosaurs discovered in Japan have been found in Fukui Prefecture.

There are four types of dinosaurs named Fukuiraputor, Fukuititan, Fukuisaurus, Fukuivenator.  Surprisingly, all of these dinosaur fossils were found in Katsuyama City for the first time. There is even a dinosaur named Koshisaurus Katsuyama. Katsuyama City is an actual dinosaur town. If you are interested in dinosaurs, it is a town you should visit at least once!

Dino Park is a facility in Katsuyama Dinosaur Forest Park where you can enjoy dinosaurs from various angles, such as the Dinosaur Museum, which I’ve already mentioned, and a fossil excavation experience facility.

Among them, Dino Park is quite popular among children. Walking along the 460m long course in the forest, you’ll find more than 30 life-size dinosaurs. You will feel as if you’ve slipped back in time when dinosaurs were alive!