Developed after a great fire in the Edo period.

Ryogoku means two countries. The Sumida River was a boundary between two countries; Musashi and Shimousa. Ryogoku was named after the second bridge was built on the Sumida River in1659. Shogun, the head of the military government, didn't allow to build bridges on the Sumida River except for Senju Bridge for a defensive reason. When the Great Meireki Fire occurred, many citizens died because there was no way to escape. So, the government decided to create a new bridge on the river.

↓The current Ryogoku Bridge, Original Bridge was located at 50m more downstream than the present one. 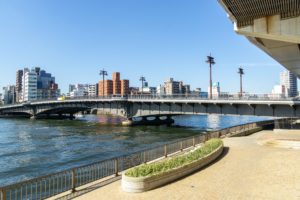 Why don't we learn the history and culture of Edo and Tokyo here?

It opened in 1993 in Ryogoku. The purpose is to preserve and hand down the history and culture of Edo and Tokyo, which are being lost over time. It is one of the popular facilities among not only Japanese people of all ages but also international guests. In 2015, the museum was renovated and new exhibitions such as an architecture model of the Edo castle and panels related to the end of the Edo period were installed.

It is located in the Ryogoku Kokugikan Sumo Arena. Their collections are based on the materials that were gathered for years by Sakai Tadamasa. He was the first director of the Museum. The purpose is to prevent the loss of precious items for the national sport. The Museum once opened with Kuramae Kokugikan Sumo Arena in 1954 and was moved when the Current Rogoku Kokugikan completed in 1985.

Materials related to Sumo, such as colored woodblock prints, ranking lists of sumo wrestlers, and decorative aprons worn by sumo wrestlers, have been collected, preserved, and exhibited. Since there is only one exhibition room, they have exhibitions six times annually to show materials as different and many as possible. Besides, since Sumo is regarded as a unique Japanese culture, they are researching the history of Sumo, e.t.c.

It opened in 1968 to preserve and exhibit Japanese swords and spread Japanese sword culture. It is an affiliated facility of the Society for Preservation of Japanese Art Swords.

The Japanese swords have not only been weapons but also the symbols for religions and authorities in ancient times.
At the same time, people enjoyed appreciating them as beautiful artworks. After the abolition of the swords in the Meiji Period, Japanese swords once terminated their roles. Also, after World War 2, they were regarded as dangerous weapons. Swords were confiscated by the stationed troops and faced in danger of destruction. However, the great efforts of people involved led the establishment of the Society in 1948 for the preservation, appreciation, research, and inheritance of Japanese swords as arts and crafts. Japanese swords are cultural assets that have been promoted into arts and crafts due to the rich sensibility of the Japanese people. They have been carefully preserved for over 1,000 years and have played a historical and cultural role. 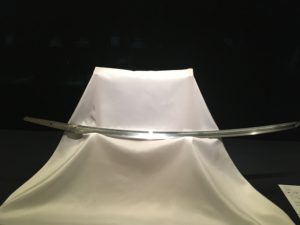 It opened in 2016 to display the works of Ukiyo-e artist in the later Edo period, Hokusai Katsushika and his family because he was born and lived in Sumida Ward.

Ukiyo-e is one of the genres of traditional Japanese paintings depicting landscapes, people's lives, celebrities, e.t.c. There are mainly two types; Handwriting and Woodblock printing. One of his most famous Ukiyo-e is "Under the Wave off Kanagawa," which is one of the series of "Thirty-six Views of Mount Fuji."

At the permanent exhibition room, Hokusai's life and works are introduced in multiple languages ​​with episodes of Hokusai's masterpieces by high-definition replicas. You can see Hokusai's original works at special exhibitions held under various themes. The four-story museum is a contemporary architecture designed by renowned Japanese architects Sejima Kazuyo, and the building itself is an art. Please don't miss to check the museum shop and the library, where you can find a variety of unique souvenirs and materials related to Ukiyoe and Hokusai.

↓The exterior of the museum. 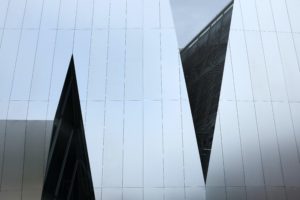 Born after the disaster, and once became the venue for sumo

Eko-in is a Jodo school Buddhist Temple which opened in 1657.

There was a great Meireki Fire in the year which burnet more than 60 % of the city. More than 100,000 people died in the disaster, and many bodies were unidentified. The 4th Shogun, Tokugawa Ietsuna, gave the eastern bank of the Sumida River to the holy priest Junyo to build a tomb for burying those who had no living relatives, and to hold a large memorial service. The reason for opening the temple has reflected on the temple's philosophy. It is to preach the mercy of the Buddha for all of the livings regardless of their having relatives or not, humans or not.

The people of Edo worshiped Ekoin because the famous Kanzeon Bodhisattva and Benzaiten, the goddess of music, knowledge, and art, were enshrined. Also, the temple became a renowned pilgrimage site. This temple was later designated as a place to exhibit the hidden Buddhist statues of famous temples and shrines throughout the country. Many people visit the temple every year. Sumo tournaments were held at the temple as a charity for temples and shrines until the end of the Meiji Era, and Ryogoku became sacred places for sumo.

↓Chikarazuka, built by the Japan Sumo Association in 1933 for the memorial service of successive sumo wrestlers. 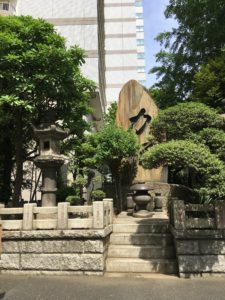 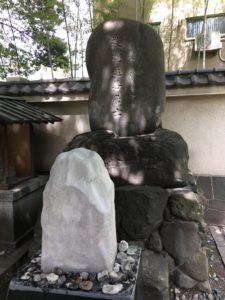 ←A grave of chivalrous robber

A sumo stable is an organizations that each sumo wrestler belongs to and practices for the tournaments. At the same time, it's a residence of many wrestlers. There are 44 Sumo stables as of July 2020, and 15 of them are located in Sumida Ward. Wrestlers wake up around 6 AM and practice between 7 AM to 10:30 AM. Some stables open their morning practice to the public with extra cost except for the tournament terms. (The price is around 5000JPY per person, and they often require a Japanese accompany.) But due to the COVID-19, it will be a bit difficult to see the practice for a while.

The tournament starts at around 8.30 AM and ends at around 6 PM. And during the tournament term, if you are around Ryogoku Kokugikan Stadium, you might have a chance to encounter sumo wrestlers! 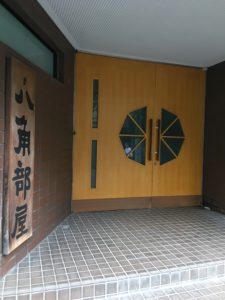 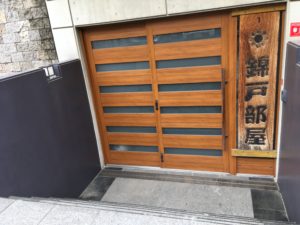 Chanko Nabe is a pot dish that is eaten daily in the sumo stables. Originally, "chanko" refers to all home-cooked dishes made by "chanko-ban(wrestlers who are in charge of cooking on that day. "The most well-known dish is chanko hot pot, and when we talk about "Chanko," it often means hot pots for sumo wrestlers. Chanko hot pot warms your body, and it's easy to have various and many vegetables at one time, and very nutritious food. There are many chanko nabe restaurants around Ryogoku Station. Why don't you try unique traditional dishes for wrestlers? Especially in the cold season, chanko will be the right choice for your lunch! 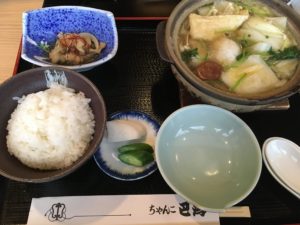 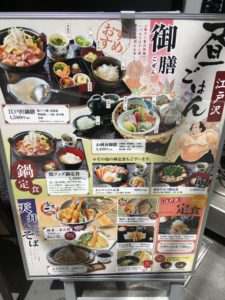 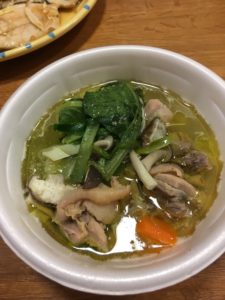 When sumo wrestlers go out, they often wear light cotton kimono and wooden sandals. And they rarely choose their everyday clothes and shoes. So even in Ryogoku, there are a limited number of clothing stores and shoe stores that are specialized in large sizes. However, these stores have an abundant line-up of products, and many people from all parts of Japan who need special sizes visit them as well.