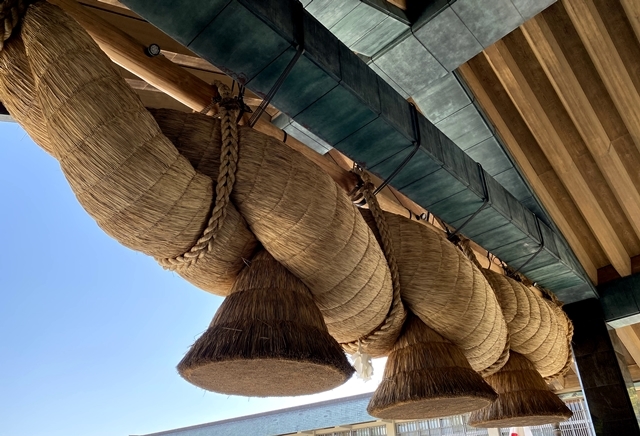 One day, I visited Izumo Taisha Shrine in Shimane Prefecture, where is about 1.5 hours flight from Tokyo, with my family to see the famous giant sacred rice-straw ropes called “Shimenawa” in Japanese. There are two huge sacred ropes in the shrine; one is decorated at the hall for music and dance called “Kagura Den” in Japanese, and the other is hung at the hall of worship called “Hai Den.” The former one is bigger and well-known. But you must be careful. The first-time visitors may miss the famous rope of Kagura Den because they usually start from the worship hall when they visit shrines.

What is “Shimenawa”? Shimenawa is one of Shinto’s sacred tools. It is made of straws of rice or hemp or fibers extracted by boiling stalks of arrowroot. The rope is twisted left, and zigzag cut papers called “Shide” are suspended under it. “Shide” expresses a thunder itself or a hieroglyph of “thread.” It is said that since thunders are identified with deities in Japan, rice plants grow smoothly with the help of the deities; thunders. Shimenawa is a mark to distinguish the sacred area where deities reside from the others. Also, people hang entrance decorations called “Shimekazari” on their entrance doors or the grille of their cars for New Year’s preparation. Shimekazari is believed to keep evil spirits away. Shimekazari is a smaller rope decoration than Shimenawa.

Then, how big is Shimenawa in Izumo Taisha? The giant rope of the Kagura Den: Length 13.6m(45 ft), Weight 5.2t (11,464lb), The thickest part of the rope’s diameter 8m (24 ft). The conical “Shimenoko” diameter hung under the Shimenawa is 1.8m(6ft). Shimenoko is said to express “rain.” This is the second-largest sacred rope in Japan. The largest one is seen in Hitachi-no-Kuni Izumo Taisha Shrine in Ibaraki Prefecture. (length :16m and weight :6t) The third-largest one is in Miyajidake Shrine, Fukuoka. (11m, 3t).

The sacred rope of Kagura Den still looked very clean and fresh when we saw it because being replaced in 2018. It took more than one year to complete making the whole sacred rope, and there was a total of 1000 townpeople of Iinan in Shimane prefecture who committed the renewal project.

How was it made? Sticky rice exclusively used for the sacred rope was planted in May 2017, harvested before bearing rice in August of the same year, and dried to prepare straws. Then, several straw ropes with a diameter of 30cm (12 inches) were created and bundled. The straw bundle, which contains a hemp rope with a thickness of about 4 cm (1.5 inches), was placed at the center. And the remaining straw bundles were piled up around it. Finally, two large bundles, with a diameter of 1.5m(5ft) and a length of 16m (52 ft), were prepared. Each rope was covered with giant woven straw mats and twisted together by workforce and cranes. It took five hours to complete twisting by eighty people.

Why have people in Iinan town committed to this project? There was a brunch shrine of Izumo Taisha Shrine in the town in 1955s, and people offered sacred rope. In 1981, due to the renewal of the Kagura Den of Izumo Taisha, the bigger sacred rope was offered by them. Sacred ropes have been offered every seven to eight years since then.

What’s the origin of the Shimenawa”? There are some mysteries about it. One famous theory is that it came from Japanese mythology, “the opening of the gate of the celestial rock cave.” The goddess of the sun, called “Amaterasu Omikami,” hid in the Amano Iwato cave because she worried about the bad behavior of her younger brother Susano no Mikoto, who was associated with the sea and storm. The world was thrown into darkness. Other deities held a party outside to take Amaterasu out of the cave. Amaterasu was attracted to the outside and to a mirror hung in front of the cave. Ameno-Tajikarao forced the cave open and took her out of the cave. The light enveloped the world again. Ropes were stretched around the cave so that she never hides there. The ropes became the origin of Shimenawa.

Some say the shape of Shinenawa comes from the mating of snakes since snakes have been believed to be guardians of the deities and are sacred. Others say the shape of the ropes means clouds, “Shide” is thunder, and “Shimenoko” is rain. So Shimenawa is displayed to wish for the productiveness of grains.

When you visit shrines, why don’t you look at Shimenawa carefully and think about what the origin of them? 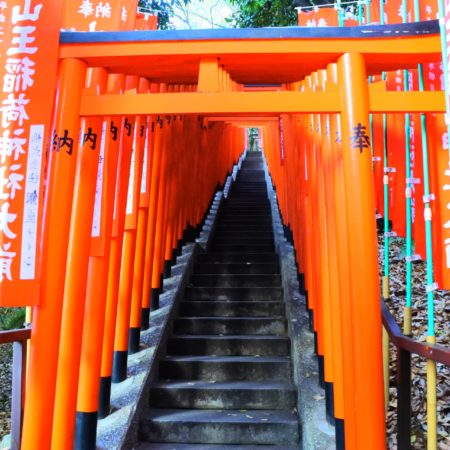 Unique Shrines and Temples in Toky…